Dysport an Alternative to Botox


Over time, it is inevitable that fine lines and wrinkles will naturally develop in areas of the face due to the repeated muscle contractions that are all part and parcel of normal everyday life. Facial movements such as smiling and squinting will create crow’s feet around your eyes, and the process of raising your eyebrows will create forehead wrinkles. Luckily for people concerned about the effects of aging on their appearance, there are treatments available that can help combat these signs.

Botulinum Toxin, commonly known as Botox, has become increasingly popular in recent years as it is highly effective in reducing the visible signs of aging, signs such as wrinkles and crow’s feet. For many years Botox cosmetic™   had a monopoly on the anti-wrinkle industry, but ever since April of 2009 when Dysport™  was approved by the FDA it has been increasing in popularity. Dysport is quite similar to Botox cosmetic in the sense that it acts as an agent that relaxes the muscle tissue to a point where the appearance of wrinkles, in particular, frown lines and crow’s feet, is reduced. 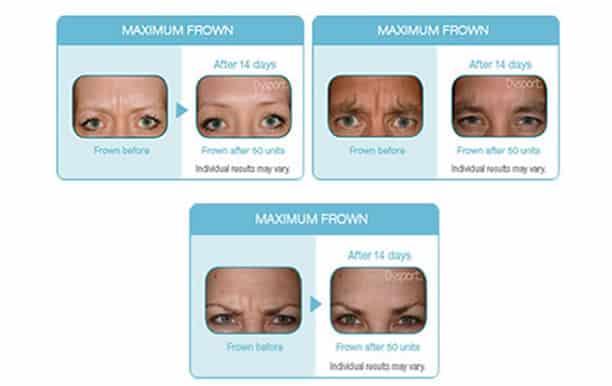 Dysport and Botox both reduce wrinkles by utilizing a type of botulinum type A that helps to relax the muscles that cause frown lines, and other overactive muscles of the face such as those that cause forehead lines and crow’s feet. This category of medicine is called neuromodulators. When either Dysport or Botox is injected into the required muscle area the nerve impulses that control the contraction of muscles are temporarily blocked resulting in the muscles becoming temporarily relaxed and experiencing a decreased amount of movement, which in turn reduces the appearance of wrinkles in the area.

The results from Dysport and Botox are temporary, and after a period of approximately 3-5 months, the nerve impulses will begin to reach the targeted areas again, resulting in the reappearance of wrinkles and lines. However, an experienced injector can help encourage the positive results of the injections of neuromodulators with regular treatment sessions.

So, in the debate of Dysport vs Botox who wins? Well, if you are looking for a faster acting, longer lasting, and cheaper alternative to Botox, then Dysport is definitely for you. Dysport has a much quicker onset than Botox and can begin to work a mere 48 hours after the treatment has taken place, whereas Botox can take up to a week before you start to notice the effects. It has been noted during studies that in most cases Dysport will last for considerably longer than Botox, with subjects starting to display more wrinkles after 30 days of being administered Botox than Dysport. This longevity of a Dysport treatment in comparison to its rival Botox does indeed demonstrate that it is better value for money, and this coupled with the cheaper cost of treatment means that Dysport is perfect for those who may be on a budget.

Prior to your treatment with Dysport, it is advisable that you avoid using blood thinners such as aspirin, fish oil or vitamin E for a couple of days to minimize the potential of bruising. Don’t forget to avoid alcohol, especially wine the day before and the day of treatment because it does thin the blood.

Small injections of Dysport are placed in the hyperactive muscles, using a tiny needle such as a thin insulin needle. The treatment time could be 10-20 minutes total, depending on how many areas are treated. Some injections might not be felt at all and in some areas you might feel a small “stinging” sensation that goes away immediately.

After your injection with Dysport, you are advised to avoid rubbing the treated area and also avoid any direct sun exposure for that day such as sunbathing. If you need to use make-up it is best to wait a couple of hours after the treatment. Also, it is advisable to avoid going for a facial treatment, massage, or hair treatments the day of receiving Dysport so as not to disrupt the normal absorption of the product. Areas of high heat such as saunas, hot tubs, and vigorous workouts should be avoided in the treatment day for best results.

So, if you feel that you are a suitable candidate for Dysport treatment then please don’t waste any more time, contact us today, and see just how we can help you.

Office Hours
Get in touch